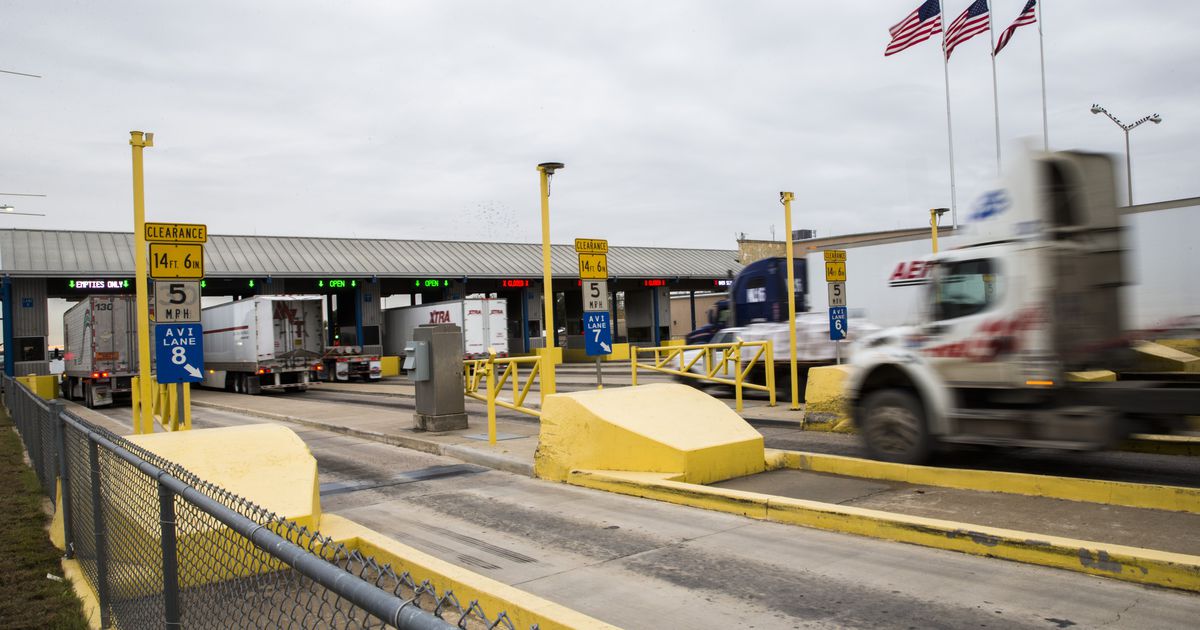 El PASO — In business language, time is money. And business leaders and trade experts are aware of the likelihood that Texas Governor Gregg Abbott’s directive this week to step up commercial vehicle security inspections at the border will take a long time and cost a lot of money. .

Already along the border — including here in El Paso, which shares four international crossings with Mexico — commercial truck lines were unusually slow on Friday, with wait times averaging three hours or more. Although federal officials are in charge of border crossings, the Texas Department of Public Safety does some inspections there.

“It’s going to be chaos,” said Norma Jean Payne, president of DFW’s Transportation Club, an organization whose members represent more than 50 North Texas trucking, supply and logistics companies. “We’ve had so many problems in our supply chain over the last year and a half, two years – I don’t think anything that’s going to delay or cause more problems is a wise move right now. There has to be a better way to handle this.

On Wednesday, Abbott said his plan to increase the number of state inspections was in response to the Biden administration’s decision to end the pandemic-era Title 42 health order allowing deportation. rapidity of migrants crossing the border. During increased security inspections, state officials could in theory uncover more of the thousands of migrants crossing the border every day, many of whom hope to seek asylum in the United States.

But wary business leaders, trade pundits and border politicians, including conservatives who support the Republican governor, note that federal officials already routinely inspect commercial vehicles as they cross the border. Additional inspections along highways by Texas officials could add hours to business trips.

“I think there are good intentions in Governor Abbott’s actions and my respects for him, but we need to make sure this process doesn’t affect the supply chain,” said Ernesto Gaytán Jr., chairman. of the Texas Trucking Association.

Gaytán explained that every loaded truck that goes from Mexico to the United States already goes through four security filters in Texas: one through Customs and Border Protection; one by the Federal Motor Carrier Safety Administration and the Texas Department of Transportation; another by DPS; and another about 30 miles past the border at checkpoints manned by CBP and Border Patrol.

Checks at these security points already add at least four hours for drivers to deliver the goods to their destination. The delays will increase freight costs, he said, both for time wasted and fuel used, and ultimately these will end up being absorbed by Texas consumers.

“We would oppose any action at the state level that results in an inspection process that duplicates inspections already performed by U.S. Customs and Border Protection,” said Britton Mullen, president of National Border Trade. Alliance, in a statement issued from their Washington, DC. Headquarter.

“While border states like Texas have an important role to play in ensuring truck safety and code compliance, the state should work in conjunction with CBP, not embark on a new inspection program. which will slow the movement of freight, which will only exacerbate the country’s supply chain crisis and has put even more upward pressure on consumer prices.

There is a lot at stake, even for consumers.

Mexico is Texas’ largest trading partner. Texas and Mexico share a 1,254 mile border that is connected by more than 27 international crossing points. The two economies are in many ways integrated into one. In 2021, there was more than $661 billion in trade between the United States and Mexico, according to U.S. Census data.

Texas is the state through which most of the freight from Mexico to the United States passes.

Data from the Federal Bureau of Transportation indicates that 70% of freight trucks entering the United States do so through Texas.

In 2021, more than 3 million freight trucks entered through Texas. Of these, nearly 2 million passed through Laredo for a value of approximately $243 billion. Interstate 35 connects to major Mexican trade routes there, running northeast to San Antonio, then north through Dallas-Fort Worth to points beyond.

“You have to weigh border security against the economy and that’s a governor’s question,” Saenz said. He added that the governor had not consulted him, but said, “I’m sure the governor is assessing these issues.”

Many business leaders seemed reluctant to openly criticize Abbott’s plan and stressed that they favored border security while being concerned about increased inspections.

“We welcome order at the border,” said Cecilia Levine Ochoa, owner and president of MFI International, a textile company that is an industry leader among Mexico’s maquiladoras, the border factory industry that fuels the economies of Texas and Mexico.

She explained that “disorderly migration interrupts the flow of trade. So I look forward to working with as many authorities as possible to ensure there is order at the border.

But business leaders fear the slowdowns at the border will only exacerbate other threats to trade. Violence and organized crime are already huge problems in Mexico’s border states.

Levin said one of the first steps to expanding trade relations with Mexico and increasing security is for politicians to stop using the border as a hot topic to make political arguments.

But that’s exactly what some think Abbott is trying to do.

Tony Payán, director of the Center for the United States and Mexico of the Baker Institute for Public Policy at Rice University, considered that the recent measures announced by Abbott were nothing more than an “electoral circus”.

“It’s nothing more than the governor talking to his political base in this election year,” Payán said. “Randomly checking trucks to see where migrants go hidden in cargo transport is impossible; it’s like looking for a needle in a haystack, but it’s part of the political circus that migration has become.

Already, Abbott has promised to help build a border wall and has orchestrated the spending of billions of dollars on security issues such as the Texas National Guard and state troopers stationed along the border.

Tom Fullerton, a University of Texas professor in the El Paso Department of Economics and Finance, called Abbott’s announcement of increased inspections an “explosive political stunt,” warning that long lines of waiting and more border searches would only keep Mexican customers away, especially as Holy Week begins and Mexicans travel to the United States to shop.

“A large number of once-loyal Mexican customers have become accustomed to not visiting Texas during the pandemic travel restrictions on non-essential traffic,” Fullerton said. “Some of those customers started returning to Texas after the restrictions were lifted last November. Longer lines to ship Latin American asylum seekers out of state will further deter international clients from returning to the Texas facilities that host them.

In Laredo, Gerald “Gerry” Schwebel, executive vice president of IBC and a longtime conservative, expressed frustration with federal immigration policies that can’t deal with mass migration. He thinks Abbott is not helping the problem.

“Why can’t we understand? Immigration is a federal responsibility and it should not impede or affect the legitimate flow of commerce and people into our country,” he said. “Why are you putting this on us as border communities? I have a problem with anything that impedes the movement of legitimate goods and people along the border.

There’s potential for more business between Texas and Mexico, say economic development leaders and corporate executives who are pushing for the “relocation” or return of businesses that left for Asia to North America, including Mexico and the border.

“We have an unprecedented opportunity because of COVID to the near coast, the smart coast, relocating so much here, and it’s the US-Mexico border that makes us an attractive place to bring manufacturing back,” Emma said. Schwartz, president of the America Foundation Medical Center in El Paso, a nonprofit organization. “Anything that causes issues for the free flow of commerce back and forth will absolutely impede all the work that we are trying to do to grow manufacturing and supply chain in the United States and along the border with Mexico. .”

Further along the US-Mexico border, business leaders in New Mexico see an opening.

“We can’t help but see this as an opportunity for New Mexico,” said Jerry Pacheco, president of the Industrial Border Association in Santa Teresa, NM. “I just don’t understand why Texas is shooting itself in the foot.”